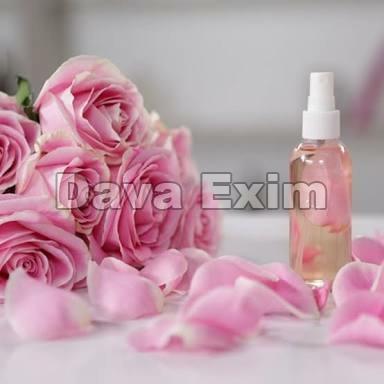 The cultivation of various fragrant flowers for obtaining perfumes including rose water may date back. Locally it was known as “GULAB”, In Middle Persian, and as “zoulápin” in Byzantine Greek.

The modern mass production of rose water through steam distillation, Rose perfumes are made from rose oil, also called attar of roses, which is a mixture of essential oils obtained by steam-distilling the crushed petals of rose.

Rose water has a very distinctive flavor and is used heavily in Persian and Middle Eastern cuisine—especially in sweets such as nougat, gumdrops, and baklava. For example, rose water is used to give some types of Turkish delight (Rahat lokum) their distinctive flavours.

In Iran, it is also added to tea, ice cream, cookies and other sweets in small quantities, and in the Arab world, Pakistan and India it is used to flavor milk and dairy-based dishes such as rice pudding. It is also a key ingredient in sweet lassi, a drink made from yogurt, sugar and various fruit juices, and is also used to make jallab. In Malaysia and Singapore, sweet red-tinted rose water is mixed with milk, which then turns pink to make a sweet drink called bandung. Rose water is frequently used as a halal substitute for red wine and other alcohols in cooking; the Premier League offer a rose water-based beverage as an alternative for champagne when rewarding Muslim players.

In parts of the Middle East, rose water is commonly added to lemonade or milk. It is often added to water to mask unpleasant odors and flavors found in tap water.

In the historic English county of Yorkshire rosewater has long been used as a flavoring for one of that regions best loved dishes; Yorkshire curd tart.

Cosmetic and medicinal use

Rose water is a usual component of perfume. A rose water ointment is occasionally used as an emollient, and rose water is sometimes used in cosmetics such as cold creams. Some people in India also use rose water as spray applied directly to the face for natural fragrance and moisturizer, especially during winters. It is also used in Indian sweets and other food preparations (particularly gulab jamun). Rose water is often sprinkled in Indian weddings to welcome guests.

Rose water is used as a perfume in religious ceremonies (Muslim, Hindu and Zoroastrian). Water used to clean the Kaaba, the Qibla for Muslims located in Mecca, combines water from the Zamzam Well with rose water as an additive. In the Indian subcontinent and Southeast Asia during Muslim burials, rose water is often sprinkled in the dug grave before placing the body inside. Rose water is used in some Hindu rituals as well. Rose water also figures in Christianity, particularly in the Eastern Orthodox Church. In the Baha'i Faith, the Most Holy Book (Kitab-i-Aqdas 1:76) orders the believers to make use of rose water.